It was at that moment that I knew my life was about to change. The moment I reported that I knew a plan was going down to take young elephants from their mothers to enter the tourism industry, I would be targeted. I knew that at some stage I was going to report the facts that I knew of and that hell would follow this. I would be accused, threatened, and emotionally assaulted by the culprits when they found out that I was the whistleblower.

This one simple example is representative of how some of the places get wild elephants into captive environments.

Not all of them, but some of them.

For those of you who have visited elephant interactive places in SA, think about the first words an elephant handler says when talking to a guest, “Morning everyone, This is Jabula, he is 18 years old and was orphaned at the age of three from poachers/elephant cull / or another example.” And then the story about Jabula carries on. Those first words justify how Jabula got to be at that facility, and the tourists believe the guide, and the guide believes the owner..

Jabula or Thandora however, cannot give their account of what truth is? 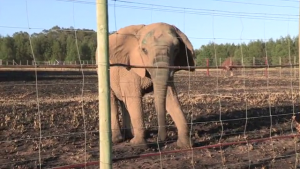 One wonders what story was told to the many visitors to Bloemfontein zoo about Thandora – that she was taken from her mother to be exhibited at a Zoo?

Animal Care, who is responsible in SA?

Now back at the scene of Thandora, and Sitting nearby, the animal welfare organisation representatives, co-sponsors of the translocation, were all at one table. I had greeted them in my usual cordial fashion, and their courteous replies were heavily tainted with their impressions of me. I was labelled by them as one of the captive elephant people. Another lesson in life, we should not label people, but we are all guilty of this.

My relationship with this organisation was always heated and aggressive. My interactions with them were almost always entirely during their inspections of the elephants where I worked at the time. All I wanted was for these representatives to do their job properly. I remember the first inspector that arrived at the place I was working at. My role was to attend the inspection with him. He had the right to inspect and I had the right to ask him what he was inspecting. I took him all over and I asked him questions about everything that he asked to be shown and everything I showed him. I asked him questions that I knew the answers to and questions of which I did not know the answers. I grilled him in every inspection that followed. He was soon replaced and I followed the same process with his predecessor and subsequently hers and the next (they seemed to change often). And I remember how distraught I was at their poor understanding of captive elephant welfare. It was very clear. This organisation simply wanted to take pictures of bullhooks*, ropes* and chains*. They wanted to prove cruelty at every account and the open articulation of their views, in writing and in interviews, stated that their intention was to close down every facility holding elephants in captivity.

Please don’t get me wrong about my quest with this organisation. My approach was to understand what they understood? I could never understand how they expected to do a proper inspection in two hours. No matter how experienced you are, few people can get insight into the animal care (elephant care) of a place in a few hours. Yes, you can assess conditions of the facility. Yes, you can detect behavioural issues, but to do this properly, you have to do a number of tests, including behavioural test.

My question was a simple one. What about the care of the over 120 elephants in captivity.? What do we do about their care NOW?

This explanation might give you some insight into my frustration of having to approach this organisation now, and report something that was going to go down. I had to report that I knew a deal was going down where young elephants were going to be taken away from their mothers to live a life of serving and interacting with tourists.

As I said earlier, I was exhausted both emotionally and physically, and made the decision to just focus on Thandora for the next 24 hours. Her 800km journey to her new home was about to begin and I had to be focused on the task at hand. I would report this once Thandora was settled in to her new home and when I had more time to think about this dilemma I was facing. 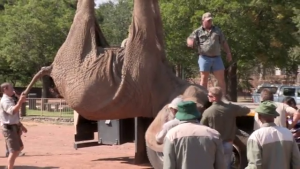 Thandora being loaded onto the flatbed

The vet called a briefing at Thandora’s enclosure before the darting was to take place. All the people involved in the move gathered, and the vest explained where he wanted people to be positioned and he went over the do’s and don’ts of the darting process. I had spent many hours with this vet doing various work with elephants. Having spent many hours with him, travelling with him in his car during elephant translocations, and spending many nights with him caring for newly born elephant calves, I got to know him well. During these times you get to know an individual simply by virtue of the hours you spend in close proximity to one another, working in intense conditions that are very often life threatening. Trust becomes of paramount importance. I instinctively knew what his next words would be and what he wanted. He is a quiet person. He says a lot with few words and often would get me to complete a task with a simple look or nod in the direction of what he wanted.

The dart gun popped and Thandora startled as it struck her rump. The waiting process for the anaesthetic to kick in began. The vet and I had discussed the area where large boulders were situated, and we had highlighted what we would do if she headed towards that area. It would be disastrous if she collapsed near the boulders. Falling on these boulders could hurt and complicate the process of getting her onto the translocation vehicle.

After a few agonising minutes she began to waiver we sprinted the 60m to get to her to influence her fall. The vet, as he always does, grabbed the dart from her buttocks in case she fell on it and I knew that the vet was unhappy with the position she was about to assume as she was hovering before her collapse. She was about to go down in an upright position, on her elbows and knees, weight on her sternum. This was not good. We needed her on her side.

In those few agonising moments, things always seem to appear in slow motion. The vet is always in my peripheral vision and I know he was focused on his task at hand expecting me to ensure the others do what they should be doing. So many new people this time, people I did not know. Students who had never experienced this before and then the welfare organisations representatives who wanted to play their part.

A documentary was being made on the project and of course the sponsors brands and representatives wanted their pound of glory during the process.  The system kicked in, and inspired by the quiet demeanour and character of the vet, we patiently showed each person what was required to get through the process. 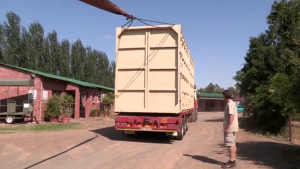 Thandora leaving for her 800km journey.

She had no idea what was going on. All this fuss around her and what it meant. Her story was huge, but it is interesting that it has never been told. I wonder why?

Why has this amazing story never been told on her behalf?

Help us provide the best quality of life for elephants in captivity!

Chains/ropes: Good elephant codes of conduct will say that an elephant should be trained to take a rope or tether. You should not use a rope or tether to train an elephant. One needs to tether an elephant for veterinary care if you do not have other equipment, like a ERD (Elephant Restraining device) or a crush, where the elephant is restricted in movement for its veterinary care. Again, the elephant should be trained and prepared to go into the ERD or crush, otherwise this can be as traumatic for the elephant as restraining it with a rope. In many  instances and in certain cases, the elephant will be roped in an ERD as well.

There are no comments, add yours