After six years of working intimately with captive elephants, interacting with some of the world’s top vets, meeting leading elephant researchers and being invited to write the code of conduct for captive wild elephants in South Africa, I thought I had a grasp on the subject.

Thandora however taught me otherwise.

Having inspired and initiated many captive elephant releases into game reserves in South Africa, I was confident that this was the right thing for Thandora, until I first set my eyes on her.

Whilst I had been a part of the decision making to move Thandora, every other captive elephant move to game reserves I had inspired had involved us thoroughly researching the elephant to be moved and the place the elephant was to be moved to. This was not the case with Thandora. 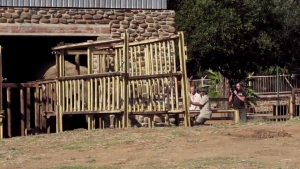 A tense moment for everyone as Thandora takes her first step out of her Stable area to be darted.

I feel it is important to be vulnerable in my approach to these blogs and the journey we will be embarking on. The use of ‘I’ is unavoidable, because the story is emanating from a vulnerable place in my psyche. My elephant journey is a highly charged emotional journey that includes strong human relationships being broken. Mistrust between elephant owners and feelings of betrayal. When it comes to elephants, there is little consensus between owners, and people emotionally invested in these beautiful animals.

It seems that there is no middle road. You either believe the story of places that keep captive elephants or you take the side of those who believe elephants should not be in captivity.

Thandora taught me that each case should be judged on its merit. 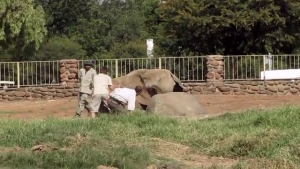 Thandora goes down upright – not a good thing – we race to her to push her over onto her side.

If I had not met the most delightful Dr Marthe Kiley Worthigton, I do not think that I would have ever reached the cognitive space of being able to write that each case should be judged on its merit. I met her years before the translocation of Thandora, and it was this delightful old lady, a Dr in Zoology who did her PhD on behaviour within the field of ecology, who ventured to study further in the area of philosophy to enable her to better understand the minds of animals and how they learn. The many hours spent with Dr Marthe were special, deep and a journey that changed my thinking and outlook to humans relating to wild animals and animals in general. Yes, Dr Marthe, “I am a human animal and they are non-human. But at the end of the day we are all animals. We just speak different languages and in terms of the various legislations that govern the management of wild animals, do not have the same rights”.

As I wrote this last sentence, I can the feel the animal rightists punch the air and the elephant keepers swearing at me under their breathes, “…he has turned into a greeny..”

Well let’s get what I believe out of the way at this early stage of the journey. I am a conservationist. I believe that it is the duty of every citizen on this earth to understand what this is and why we ALL need to have a sound understanding of what conservation is and means.

So I believe in conserving biodiversity. Man has stuffed up, so man should strive to attain the balance that eco-systems need. Please let us not fool ourselves that we have the ability to reverse the downward spiral we have created. We are now managing pockets of conservation spaces and metapopulations* of species. That is a fact.

What better time to ask the question:  what value has Thandora’s plight had on the quest to conserve biodiversity?

After an 800km journey, Thandora takes her first step into what was to become her new home.

Laying eyes on her for the first time, my heart nearly stopped. She was this skinny, demure little female. Small and timid. She gravitated towards her keeper when he attracted her to the section of her enclosure the vet had chosen for her darting procedure.

I noticed her strange stereotype, almost a dance, a waltz or two-step that never continued: Two steps forward. Hesitate. Half a step back with one front leg and then one step forward – hesitate with leading leg held up, half swinging. Then walk again.

Having had observed 1000’s of hours of elephant behaviour and reading many behaviour (activity) budgets of elephants conducted by students, this behaviour was a first for me. My gut told me that there was something else at play here. Right there and then I wished Dr Marthe was with me. I needed her experience, especially because of the gathering of ego’s that was converging in the spot where Thandora’s journey to a game reserve was about to begin.

At that stage I was emotionally and physically exhausted. Having travelled from the Eastern Cape the previous day, I stopped at the Zoo to drop off certain items for the project and then continued to Gauteng to collect some behavioural biologists who were committed to record her behaviour over the next few weeks on arrival at what was to become her new home (a round trip of approximately R1800 km’s – non-stop).

There was something else that was bothering me – something serious – related to elephant ethics but totally unrelated to Thandora.

Help us provide the best quality of life for elephants in captivity!

Metapopulation: a group of populations that are separated by space but consist of the same species. These spatially separated populations interact as individual members move from one population to another.